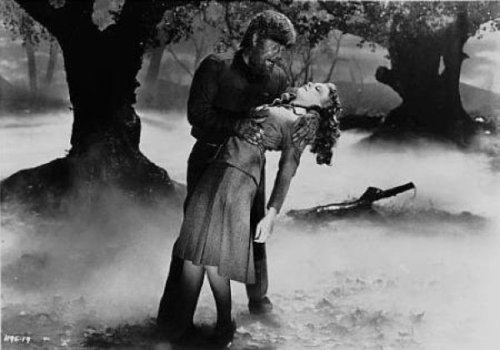 Each studio had their niche in the early days of Hollywood. For Universal Pictures, it was horror. Over a span of two decades, they banged out one horror icon after another- Frankenstein, Dracula, Bride of Frankenstein, The Invisible Man, The Wolf Man, and finally The Creature from the Black Lagoon. These creature features were smart, they were well written, they were horrific to 1930’s and 40’s movie-goers, they used excellent source material, and they had a heavy influence on later films (more on this later). They were all fantastic. But in an earlier entry, I referenced The Wolf Man as my favorite classic monster flick from Universal. Here’s why:

1. The story is as old as they come, biblical even.
Frankenstein and Dracula drew their source material from 19th century literature. The Mummy was essentially a nod to the revival of the Curse of the Pharaohs in the 20’s. The Invisible Man and the Creature from the Black Lagoon were relics of the fears of modern science (namely, in the Creature from the Black Lagoon’s case, Darwinism). But the Wolf Man… well, that story goes back quite a bit further. “The sins of the father shall be visited upon the son”. You see, at its’ heart, The Wolf Man is about a family curse. It’s about faulty genes. It’s about the sins of the father, and his father before that, and his father before that, being visited upon the sons. This is made even more pertinent considering that Lon Chaney, Sr. discouraged his son Lon Chaney Jr., from going into acting. Speaking of which…

2. Lon Chaney, Jr. was perfect for the role
I suppose this doesn’t separate him all that much from the other Universal monsters. After all, Bela Lugosi, Boris Karloff, and Claude Rains nailed their roles as well. But this isn’t about which was the best actor. Rains and Karloff run laps around the others. It’s about which actor was best suited to their role. Chaney’s hang dog expression seemed to evoke so much more sympathy for the character. He was infinitely likable as Lawrence Talbot. You pulled for him. And along these lines…

Who's the best Universal movie monster? Don't make me slap you.

3. The Wolf Man had some humanity to him, which the other Universal monsters lacked
Frankenstein was a conglomeration of corpse parts, and it was stitched together from thieves and murderers no less. The Creature from the Black Lagoon was a fish-monster, possessing nary a human trait. Dracula is the undead, and he’s a rich asshole to boot. The Mummy was hell-bent on revenge and would harm anything in his way. And the Invisible Man was a science nerd. Not one of them was likable. Fun? Sure. Frightening to filmgoers at the time? You betcha. But Chaney’s Wolf Man was the only one that was fun, frightening, and also likable. He was human. He was doomed. He was fighting this awful curse that had been placed upon him. He didn’t want to harm anyone but he simply couldn’t stop himself from his awful urges. Which brings me to…

4. The metaphor is incredible
As far as I know, screenwriter Curt Siodmak wasn’t thinking about addiction when he wrote the script. But it’s a perfect metaphor. It gets late at night, a man becomes an unrecognizable beast, he hurts the ones he loves, and has absolutely no awareness of the damage he’s doing. That could be alcoholism, it could be gambling, it could be drug addiction, it could be any number of things. Every single person has found themselves, at one point or another, doing something that they shouldn’t be doing at personal risk and at risk to their loved ones. We can all relate. Speaking of Siodmak, I do know of one thing that he purposely built into the script, and it’s jaw-dropping when you think about it…

5. Those bearing the “Mark of the Beast”- a pentagram- were marked for death
Siodmak was a German Jew who escaped the Nazi rule in his own country to come to Hollywood, where he continued his work as a screenwriter. When Siodmak was commissioned to pen the script for The Wolf Man, he included “the mark of the beast”- a pentagram (seen only by cursed individuals) that signifies who will be the next victim. The pentagram-bearer is marked for death. As a Jewish man having slipped away from the Nazis, Siodmak knew a little something about people marked with stars/pentagrams who were marked for death. He later pointed out that, when writing about this creature that could turn on a dime from a likable person into a horrible monster capable of atrocities, he was referencing the copious amounts of Nazi sympathizers in Germany who, overnight, went from being friends and neighbors to Jews to supporting genocide.

Even a man who is pure at heart, and says his prayers by night, may become a wolf when the wolfbane blooms and the autumn moon is bright.

6. The cast is as good as you’ll find in any of the Universal creature features
Claude Rains was in it. Bela Lugosi was in it. Chaney, Jr. was in it. None of the other creature features had that much monster star power. All that was missing was Karloff and they would’ve pulled off the Grand Slam of Monster Actors. Even Maria Ouspenskaya was perfect in it as the gypsy woman.

7. Later influence and a link in film’s evolutionary chain
The foggy moors, deep shadows, visual contrast, Gothic architecture… stylistically, does that sound familiar? It sounds a lot like film noir. It’s tough to give The Wolf Man sole credit for this, as Dracula and Frankenstein/Bride of Frankenstein employed the same techniques at an earlier time than The Wolf Man. Nevertheless, it was a worthy successor in this regard to Dracula/Frankenstein/Bride of Frankenstein. And these films all served as a vital part in Hollywood’s stylistic evolutionary chain, linking up the mise en scène and expressionism of silent European films in the 20’s with film noir in the 40’s and 50’s.

8. It’s a perfect character arc
It’s built right into the whole concept. A man starts off as, well, a man. Then events happen- he’s bitten by a wolf, the moon comes out- and he winds up somewhere else entirely (as a beast, half man and half wolf). I know it’s Film School 101 stuff, so it’s not particularly deep or insightful on my part to point it out, but I still think it’s worth noting.

So there you have it- the case for why The Wolf Man is the alpha dog of Universal Studios’ creature features. And that’s quite a feat, really, because each one of those original Universal horror films was excellent in its’ own way. It’s easy to dismiss The Wolf Man as hokey Halloween fun but it’s so much more than that.