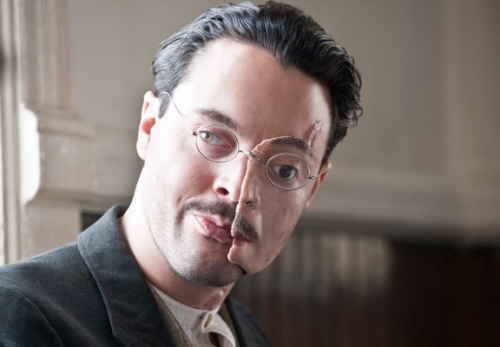 I could dance around the topic and try to blather on and on about what happened in the most recent episode of Boardwalk Empire, but let’s not do that. Let’s cut right to the good stuff. Jack Huston’s debut, as WWI veteran Richard Harrow, stole the show. Harrow shows up at a hospital where Jimmy Darmody is being treated for a recurring leg injury that he attained during his WWI service. The two strike up a friendship and Darmody discovers that Harrow was a sniper- a damned good one at that- capable of offing a German soldier just an inch below the eye from yards and yards away. And so Darmody begins to give presents to Harrow. He treats him to prostitutes; booze; and a dose of dignity by talking him into leaving a psychiatric ward of sorts where soldiers are apparently tested for post traumatic stess disorder via a battery of embarrassing questions.

And how does Harrow repay the favors? More on this in a second. Elsewhere in the episode, particularly in the epic battle of Lucy the Whore and Margaret Schroeder with Nucky Thompson’s affections at stake, Lucy is starting to lose out completely. She bursts into one of Nucky’s meetings to luridly beg him to fornicate with her, and take her to “the pictures”. It turns out she wants to go see Dr. Jekyll and Mr. Hyde. More and more, Margaret is winning the battle. Of course, there’s also a struggle that she’s undergoing as well, fighting the notion that she’s just another “concubine” to the powerful sorts who run Atlantic City.

Fast forward towards the end of the episode. Darmody has tracked down Liam, Charlie Sheridan’s gangster who cut up Darmody’s prostitute girlfriend, Pearl. Initially, it seems that Darmody is going to let him live. He gets up and walks away after telling Liam to leave town. And then the camera focuses on a pitcher of water that a waiter is holding. The pitcher explodes. Jump to Liam, who has (drumroll please)… been shot, an inch below the eye. And as they show Liam collapsing and all hell breaking loose inside the restaurant, we hear Bach’s “Toccata and Fugue in D Minor“. You might know it better as “That creepy organ shit that plays whenever you see the Phantom of the Opera”. The whole event- Darmody leaving, glass exploding, Liam shot, cue Bach, then we finally see Harrow putting his sniper’s gun away- took about three seconds. And it took even less than that for me to grin from ear to ear like the Cheshire Cat. It was one of the absolute coolest things I’ve ever seen on TV. That’s a bold statement but I don’t care because it’s true. The cherry on top was that after we saw Harrow putting his rifle away, it cuts to Lucy, sitting alone in a theater, taking in Dr. Jekyll and Mr. Hyde. Obviously the song is more closely associated with The Phantom of the Opera, but the way theaters worked in the silent era was that theater organists supplied the score to the movies. I could be wrong here but I don’t think it was too far out of the ordinary for the song to play during a screening of Dr. Jekyll.

Other significant developments included the arrival of Meyer Lansky, which adds to the constellation of Who’s Who of 1920’s mobsters. Lansky shows up claiming to be “Michael Lewis”, and tries to lure Chalky White into selling to Lewis/Lansky instead of selling his product to Nucky. Chalky assumes that it’s a test put to him by Nucky and declines the offer, later telling Nucky that the test was a crock. Nucky, of course, has no clue what the hell Chalky is talking about. Lansky, in the meantime, is seen later to be working for everyone’s favorite gonorrhea patient, Lucky Luciano. And both of them are conspiring with the Lanzetti Brothers (a.k.a. the crew that works with Doogie Howser’s friend Vinnie).

Darmody was finally ratted out to Van Alden, by name, by “Billy Winslow”- the kid who, in episode one, created the car crash diversion that led to the Capone/Darmody heist from Arnold Rothstein (and the five person homicide). Obviously this is going to create some fun tension moving forward. Speaking of Darmody, we also found out that his fiancé and the mother of his child is a lesbian, or a bi-sexual depending on how you look at it. It was a somewhat brief scene but she was in bed with another woman, lamenting that they not be seen together by Nucky because Nucky is helping to raise Darmody’s child.

Less importantly, Nucky has daddy issues to the point that he rebuilt his father’s home (after kicking him out) and burnt the house down despite giving it away to a young couple with a newborn. It’s another poignant example of Nucky being willing to cut off his nose just to spite his face, not unlike when he pissed away Darmody’s $3,000 on the roulette wheel.

Here’s the preview for the next episode, and the only song I can find in Youtube that was featured in episode 7.