Thanks for Nothing, Netflix 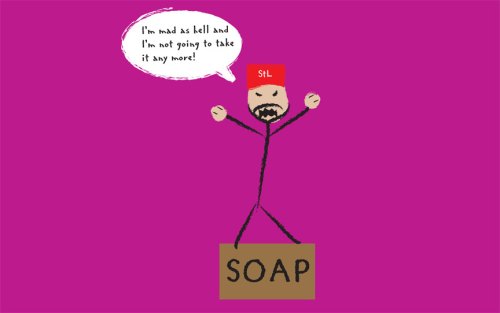 That's how I look when I'm angry.

I was alerted yesterday, along with millions of other Netflix users, that the price of my plan would be increasing soon. I’m obviously a movie geek so I do the four-at-a-time plan, which had been costing me $23.99/month. With the new increase, my plan is now going to cost $27.99/month. That’s no small increase. That’s 16%. That’s $48/year. The new price is the cost of a three-at-a-time plan PLUS I could give a one-at-a-time plan as a gift to someone who might even become a customer who pays more per month. I’d even have money left over. At the new rate, it’s like Netflix is getting two months of subscription money at my old rate out of me without ever sending me a disc.

What bothers me about this the most is that it’s not an isolated incident. Netflix has been making antagonistic decisions towards their most loyal customers for about a year now, maybe longer. First they drastically reduced the “Friends” feature, burying it in a small font at the bottom of the page. The actual features- the lists that fans created, the reviews, the slider page where you could see what your friends had in their queues- all remained. But it was almost impossible to find. And on the individual film pages, you could no longer see how your friends rated certain movies. That was an integral part of my film-selection process- knowing how people with similar tastes felt about a movie. They replaced it with their own statistical matrix that predicts which films you’d like based on your other ratings. While it’s not a horrible system- the new matrix- it’s far from perfect. It’s been way off more than it should be if it’s supposed to be the replacement for, you know, ACTUAL FRIENDS WHOSE TASTES YOU CAN TRUST.

Then, soon thereafter, the Friends feature disappeared altogether. It was gone “like a fart in the wind” (thank you, Warden from Shawshank Redemption). The reviews are still up, which is all well and good, but I have no clue what any of my friends are watching and/or rating at this point. Additionally, any lists that you created before have been taken down and buried in a bunker in the desert in Area 51. Those would’ve come in really handy since I started TDYLF, which has sort of served as a therapy for my annoyance (and now anger) with Netflix.

Adding insult to injury, as they pushed people towards more Instant Watch titles, a big chunk of my queue vanished into the “Saved” section. It was no longer available because it wasn’t cost-effective for them to hold onto those titles anymore. Now… trust me, I understand that it’s their business, and they have a right to do some of these types of things. If they want to remain viable, it’s something they have to consider. But now I’m being asked to pay more, while receiving less. It’s not like there’s been some whopping increase in Instant titles that are available. Far from it. Nor is instant watching going to be the same quality as having an actual disc in hand.

It’s just a piss poor mode of customer service. It’s been one thing after another and I’ve finally had enough. I’ve downgraded my account (cutting it in half) and I’m keeping an eye out now for other DVD delivery services. As soon as I find one that has Netflix’s selection, this divorce will be final. Of course, it’s not like I could send them an e-mail saying as much because they guard their customer service info- beyond a generic phone number that goes God knows where- like fabregé eggs. Netflix used to be a service that I loved. Ask several of my friends and they’d tell you how I’d sing Netflix’s praises. And now they’re systematically taking away every single thing that made me say that about them.

Side note here… odds are good that some of the folks who are happy with Netflix are going to read this, and potentially bash me for what I’m saying. Good for you, I say. If you’re happy with the service and the price and you’re unaffected by the things I’ve mentioned, then that’s fantastic. I’m glad someone can get their full value out of it. Just understand that I am not one of those people.

And to Netflix, I say “Thanks for being a bigger turkey this Thanksgiving than any other I could possibly buy”.

25 responses to “Thanks for Nothing, Netflix”