Dogs are, in a word, great. They’re the only creature on earth (not related to me) whose feces I’d consider picking up. Of course, TV has had some great dogs. But everyone knows about Lassie, Eddie (Frasier), and even Apollo and Zeus (Magnum P.I.). Nobody really sings the praises of the cartoon dogs. Here are the ten best.

“I like you, Seymour. You’re not constantly judging me like all the other dogs.” (pause) “Are you?” I have never wanted to own a TV dog more than Seymour. The end of that whole episode, where Seymour gets old waiting for Fry to return, might just be the saddest thing I’ve ever seen on TV. Um… pardon me, I have some dust in my eye. *sniff*

I’ve always felt that Brian is exactly what I’d be if I was a cartoon. That’s weird and I should move on? Ok. You’ve got a deal.

You may recall these two. Chester was the tiny sycophant dog, while Spike was the big angry bulldog. Invariably, something would happen to Spike and it would shatter Chester’s delusions about hero worship. Then Chester would wind up having to take matters into his own hands. Jump to the end and there’s been a role reversal- Spike has become the yippy sycophant, Chester is now the alpha male. So I guess it’s like Ingmar Bergman’s Persona but with male cartoon dogs instead of real life Swedish actresses.

He solved crimes, never humped anyone’s leg, and had TV’s most famous speech impediment. Other than his annoying nephew, Scrappy, Scooby had no flaws.

Mister Peabody is easily the most academically accomplished dog on the list. Other dogs on this list might talk, and Brian Griffin even went to an Ivy League school (Brown), but Peabody actually invented a time travel machine. Re-read that for a second. He invented a time travel machine. This dog accomplished what mankind could not. I suppose he had the added advantage of using Sherman to circumvent child labor laws, but that’s purely the physical part of the creation of the time machine. All of the brainwork had to be done by the dog. Plus, the show was a forerunner to Bill and Ted’s Excellent Adventure. Maybe. Kind of. Probably not.

There’s a good chance that you’re saying “Who?” or “What is Mission Hill?” right now. It was a WB show from the late 90’s created by Bill Oakley and Josh Weinstein. You may recognize those names as the Executive Producers of The Simpsons. I only found out about the show via re-runs on Adult Swim around 2005 or so. It was a fine show and it’s too bad that it only made it one season. Stogie was the golden retriever. He could be found eating couch cushions, drinking booze, and generally creating the type of havoc that only a really dumb but lovably destructive dog can. He is the antithesis of Mr. Peabody and Brian Griffin. In fact, he is most likely the dumbest dog in the history of TV dogs. We’ve all known this dog. And that’s why Stogie makes the list. Here’s the introduction of Stogie to the show: 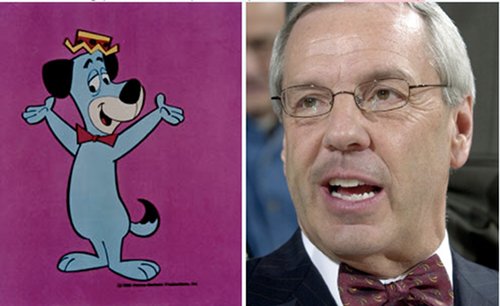 First things first- Huckleberry Hound is not to be confused with former Kansas University (and current North Carolina) men’s basketball coach Roy Williams. I know that there’s obviously a resemblance, right down to the dopey expression, but they’re different people. As a matter of fact, Huckleberry Hound is also alleged (incorrectly, according to Wikipedia) to be based on a different North Carolina native- Andy Griffith. The dog’s creator denied it and I have no reason to doubt him. But the similarities are uncanny. If Brian Griffin and Mr. Peabody were book smart, Huckleberry Hound was streetwise, possessing an uncanny hillbilly knack to screw up and somehow still come out on top.

By day, he was Penrod Pooch, a mild-mannered police station janitor. But when trouble struck, he morphed into Scatman Crothers, the telepathic chef at the Overlook Hotel in The Shining. Except he’s not just the Overlook Hotel’s telepathic chef; he’s also a dog who practices kung fu. In reality, he was a bit of a bumbler and he needed his cat sidekick to save him a lot of the time. And he obviously had an ego. Who the hell calls themselves the “number one super guy”? Jackasses, that’s who. Flaws aside, there’s no denying the allure of a dog who sounds like Scatman Crothers, may or may not be telepathic, and knows kung fu. 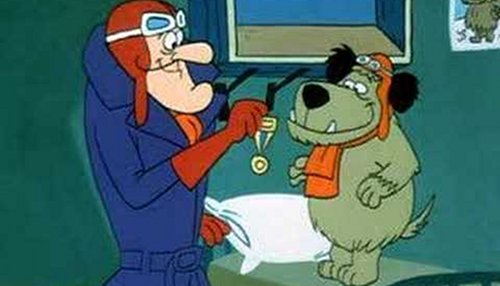 Hanna Barbara sure liked their dogs. If you’ve ever had a cold that’s produced a wheeze in your throat, then you have done a Muttley impersonation at least once in your life. You might not have even known it at the time. The beauty of Muttley is that he appeals to the scamp in all of us. Unlike Dick Dastardly, his life partner, Muttley always seemed wise enough to realize when their nefarious plans were about to go horribly wrong. And he could drive a car. So there’s that.

33 responses to “The 10 Best Cartoon Dogs in TV History”