Fictional Colleges I Wish I Had Graduated From

All over the United States, colleges and universities are granting diplomas to a flood of kids who have earned them through four to seven years of hard work, with intermittent periods of impairment and debauchery. It makes me nostalgic for the time when I was one of those impaired, fun-loving creatures on the cusp of taking a job from some poor sap. I miss those years because it’s such a spectacular time in a young person’s life. At the time of graduation, you have endured the maximum amount of youthful highjinx before you must begin the process of becoming a really boring adult. I’m content with my degree from my alma mater, but here are some fictional colleges I wish I’d graduated from. And congrats to any graduates out there:

Harrison University, Old School (2003)
The best part of graduating from Harrison University is that your campus connections would include that guy who hilariously does the obscene version of Bonnie Tyler’s “Turn Around”. No matter how many weddings and divorces and more weddings you have post-graduation, you could always make the reception memorable. Depending on the type of degree you have- like, say, a political science degree (hypothetically)- a connection like that is way more valuable than your undergraduate degree.

Grand Lakes University, Back to School (1986)
First and foremost, Grand Lakes U. was home to an NCAA Swimming and Diving powerhouse. Four years of taking in championship Swimming and Diving competitions would’ve been all of the college sports action I could handle. Secondly, the faculty at Grand Lakes might sleep with you if you play your cards right. Sleeping with faculty is a guaranteed A grade in their course, contingent upon your extracurricular performance. Just don’t let the war veteran history professors intimidate you.

I am completely excited about the prospect of attaining a degree from any college that employs Lewis Black as the Dean. It’s really that simple.

Clayton College, College (1927)
Clayton offers the most well-rounded education of the colleges on this list and carries the added bonus of flapper women from the 20’s. Their baseball team even has an opening at 3B, if one was so inclined. That’s assuming you can beat out this guy:

Adams College, Revenge of the Nerds (1984)
It’s a mythical place where nerds and jocks can live in harmony- very, very hard-earned, stolen-panty-fueled  harmony. However, they really need to work on their frighteningly lax sexual harassment policies. I would’ve gone there but I certainly would never send a daughter there.

Faber College, Animal House (1978)
In many ways, my own college experience mirrored the Faber experience. The fact that lots of other people might say the same thing speaks to why the film has so much charm. I think most college kids have known (or been) John Blutarsky or Otter or Boone. You may have even known a D-Day or a Stork. The positive is that the faculty will share their drugs with you. The negative is that the same faculty may expect you to share your significant others with them. No dice, Donald Sutherland.

Eastern State University, The Program (1993)
The antithesis of Adams College, football rules the day here. Nerds don’t even apply. Football players even got away with steroid use and serious disruption of the peace in various ways. But, the schedule was loaded with great games and the school seems to be willing to cheat to win. Odds are good you’d get to celebrate some kind of championship in one of the major sports.

Huxley University, Horsefeathers (1932)
The football program is improving, and the co-eds are quite clever, if also conniving. The President of the esteemed school is Groucho Marx. How could you go wrong? 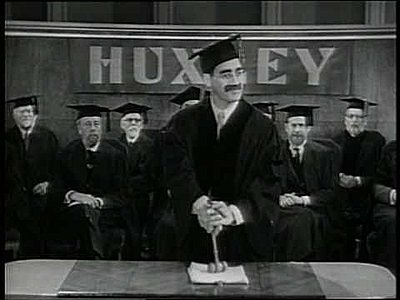 13 responses to “Fictional Colleges I Wish I Had Graduated From”