Movies Where Hot Weather Sucks and Makes Everything Worse

While summer doesn’t technically start until June 21st, the sun has already started the process of goring us like a bull might with its horns. Here in St. Louis, we just completed a stretch of 13 days in which 11 of them featured 89 degree temps or higher. Five of those days were 92 and above. And in St. Louis, nestled between the Missouri and Mississippi Rivers, it’s not just the heat. It’s the humidity. Summer here is a lot like living inside of a dog’s mouth for a third of the year. I imagine it’s becoming brutally hot all over the country. Having said all of that, as you can plainly see, I’ve started my annual rite of becoming an angry, ornery jackass about the oppressive heat. But I’m not the only one who’s affected by the hot weather. Here are some movies in which heat waves changed everything.

Do the Right Thing (1989)
The Location: Brooklyn’s Bedford-Stuyvesant neighborhood 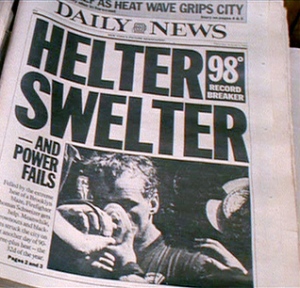 The Effect: The hottest day of the year forces race relations to boil over into first death, and then rioting and looting. Spike Lee did a spectacular job of playing up the heat wave, going so far as to alter the shooting location’s design by painting things orange and red.

Rear Window (1954)
The Location: A series of Manhattan apartment complexes
The Effect: Tensions are high all around the apartment courtyard, with the brutal heat signifying the growing trouble that Jeff (Jimmy Stewart) is witnessing in Lars’ (Raymond Burr’s) apartment. The film opens with a shot of a thermometer showing 94 degrees and an older couple sleeping outside on the fire escape. The film later features a lovely woman dancing in her underwear. I’m going to pretend it was to beat the heat, though we all know that Hitchcock invariably wanted to make all of us feel a little bit dirty and voyeuristic for witnessing it.

The Seven Year Itch (1955)
The Location: New York City
The Effect: This film breaks a bit from convention. Rather than the heat being used to signify rising tension or anger, it’s used to signify the growing sexual tension between Richard (Tom Ewell) and the stunning upstairs neighbor (played by Marilyn Monroe). The heat directly impacts the plot, with Monroe’s character spending more time in Richard’s house because he has an air conditioner.

12 Angry Men (1957)
The Location: A jury room
The Effect: Twelve men with varying motives retire to the jury room to determine the fate of a teenager who will receive the death penalty with a guilty verdict. As if the differing personalities didn’t add enough tension, the city is in the grip of a heat wave. As temperatures rise, so does the boiling blood of the men in the room.

The Silence (1963)
The Location: A hotel in a purposefully anonymous war-torn country
The Effect: Sort of a combination of rising sexual tension and emotional tension. With the sweltering heat, Anna (Gunnel Lindblom) assumes less and less clothing and becomes more and more sexually active. This is in direct contrast to Ester (Ingrid Thulin), her sexually repressed and bed-ridden sister. And this contrast makes up a significant part of the growing chasm between the two, creating the tension that makes the film thrive. Bergman was a master of using the sun to make an otherwise inviting environment (such as a beach) appear harsh, unwelcoming, and bleached out.

Falling Down (1993)
The Location: Los Angeles
The Effect: It’s no surprise that obnoxious heat would play a role in a film that features an average schmoe snapping under the strain of his own life and going on a crime spree. The opening scene features Michael Douglas sitting in a horrible traffic jam in a car with faulty air conditioning. If you’ve ever been inside of a car that isn’t moving and has no air conditioning in a heat wave, you can understand how a person might go all Charles Bronson on people.

Dog Day Afternoon (1975)
The Location: A bank in Brooklyn
The Effect: Hot weather adds to the fevered motivations behind Sonny (Al Pacino) and Sal (John Cazale) taking people hostage and robbing a bank (to pay for sex change operation). The title is even a nod to the proverbial “dog days of summer”.

Barton Fink (1991)
The Location: A screenwriter’s grimy apartment in early Hollywood
The Effect: Barton (John Turturro) lives in the squalor of an apartment ill-equipped to deal with things like 100-degree temperatures. The heat is a vehicle that slowly drives Barton into the depths of madness first, and later- possibly?- literally into Hell. Fanning the flames is the combination of the heat with ambient moisture, which makes his wallpaper constantly peel.

The Ballad of Cable Hogue (1970)
The Location: The Arizona desert
The Effect: The entire plot revolves around land-ownership and the possession of water in the arid desert climate. At one point early in the film, the heat is even used as a means of torture when Cable is left alone to boil under the sun in the desert. I’ve never been as thirsty while watching a film as I was during The Ballad of Cable Hogue.

Tagged as 12 Angry Men, Barton Fink, Do the Right Thing, Falling Down, Film, Movies, The Ballad of Cable Hogue, The Seven Year Itch, The Silence