Knowing When to Say “When” with a TV Series

There are an absurd amount of options to watch on TV. HBO, Showtime, and AMC all offer a plethora of high-quality shows. The major networks have their share of options. There’s seemingly a reality show for every single profession out there, including “useless human being from New Jersey”. That being the case, it’s sometimes difficult to keep your DVR clean. After all, you need to save time, DVR space and emotional investment for the shows that really appeal to you. There’s no time to waste with dreck. That being the case, I find myself becoming much more willing to cut the proverbial cord with a series mid-stream, opting to not ride it out until the series finale. 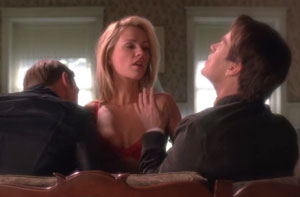 The reason I’m writing about all of this right now is HBO’s True Blood. It’s undergone a horrible transformation from season one until the just-completed season four. During season one, I thought “Well, that’s fun and interesting”. Then came season two: “Hmm… so now they’ve added faeries and maenads? Uh… ok, I’ll go with it”. Season three: “This is seriously a bad show. But I can stomach it if I treat it like a B-movie”. This season has pushed it over the edge. My season four reaction: “This is the worst show on TV”. I knew it was time to hit the eject button when I found myself saying “I wish all of the characters except for two would die”. Thus, around episode nine, I made a deal with myself. I would ride out the current season, and then no more. Last night’s episode was the last I’ll subject myself to from True Blood.

I made a similar decision a few years back with Californication. The concept was fun enough. Who can turn down an alcoholic, sexaholic writer who’s in a constant state of meltdown? But it never really went anywhere. Season one did a fine job of establishing characters. Seasons and two and three were more of the same. The characters were lifeless and the show was rudderless. So while I really like Hank Moody, the TV show character, I couldn’t bring myself to watch any more of his antics. He was killed by bad writing.

There were warning signs all over the place for AMC’s The Killing. One episode after another introduced potential new perpetrators for Rosie Larsen’s murder. By the middle of the season, it was playing out like some sort of crappy Scooby Doo episode. And the ending of the first season was the equivalent of being given a prostate exam by series showrunner Veena Sud. It will start back up sometime in the 8 months or so. I won’t be watching.

This is how my face looked as the latest season of Dexter unfolded.

A handful of other shows are on life support for me right now and it’s going to be really tough to shut them off if I need to do so. After a really amazing fourth season, Dexter took a horrible misstep last year, re-hashing storylines that had already been re-hashed on the show before. It’s had five seasons now with, unfortunately, no real end in sight. And at some point, it becomes insulting to ask the viewer to put their brain on pause questioning the plausibility. Even with the goofy fifth season, they had an out clause at the very end of last season that would’ve made it all make sense. It was the obvious, natural solution that would have put an exit strategy in place. It would’ve been enormously satisfying. Instead, the show’s writers ignored it completely and now it seems that the show could go on forever, particularly if they insist upon bringing back the same stories from the earlier seasons. If the next season doesn’t show some signs of ending things reasonably soon, it may just be the end of the line for me watching the show.

The Walking Dead had loads of potential. Frank Darabont was the showrunner for a TV series about living in a post-apocalyptic world filled with zombies. It’s appointment TV for fans of horror. But the first season featured only seven episodes, and they were all extraordinarily flat. Then news came out recently that Darabont was stepping away from the show. The show is taking a lot of hits right now. I’m giving it a second season but you’d better believe that I won’t have any problems stepping away from it if it continues along lifelessly through the second season, scheduled to start soon.

What all of this amounts to is that it frees me up to watch new shows. It also frees me up to appreciate the truly good ones on a deeper level. Breaking Bad has aired immediately after True Blood all season long. I’ve watched True Blood first, followed by Breaking Bad, and it has seriously emphasized just how good Vince Gilligan’s show is and just how awful True Blood has been. It’s been like having a porterhouse steak with a ramen noodle appetizer. If you didn’t appreciate that steak beforehand, you sure as hell do after you’ve had ramen noodles immediately beforehand. Next spring when Game of Thrones comes back, I won’t have to ask myself “Which should I watch first, Game of Thrones or The Killing?”. In retrospect, it seems like a stupid question from the start. By trimming the fat off of my TV-watching existence, I’ve improved it infinitely.