Japan and the Criterion Collection: A Winning Combination

Last weekend, thanks to the fantastic review from the always trustworthy Goregirl’s Dungeon, I caught up with the Criterion Collection release of Kuroneko (1968). It’s about a woman and her daughter-in-law, who are raped and killed in a fire by a band of samurai. They return as ghosts, exacting their revenge upon all samurai… until they encounter the woman’s son (and the daughter-in-law’s husband), who has become a samurai. I won’t continue lest I spoil the film. Needless to say, it’s a tremendous movie. And it made me look back on all of the Japanese films I’ve seen out of the Criterion Collection. I haven’t seen a bad one yet.

It all started in February 2007. I’d joined Netflix at my friend Ryan’s behest so I could educate myself a little bit about world cinema. He pointed me in the direction of Akira Kurosawa, and my friend Marty recommended Kurosawa’s Rashomon (1950). It took me about 15 minutes to go bananas for the film. Enamored, I grabbed The Bad Sleep Well (1960), Ikiru (1951), and The Lower Depths (1957) within a month. Ikiru remains one of my very favorite films ever made. Eventually, I branched out from Kurosawa when I watched Kon Ichikawa’s The Burmese Harp (1956).  Then came more Kurosawa, then Onibaba (1964), then Harikiri (1962), all in 2007. 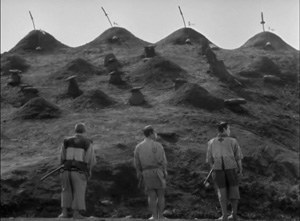 Awesome use of the Rule of Thirds in The Seven Samurai.

I could continue rattling off all of the Japanese films I’ve seen out of the Criterion Collection, but I’d rather be more succinct. The point of the exercise is to acknowledge the tremendous beauty of the world of Japanese films that have been placed in the Criterion Collection. It’s amazing to me that I’ve been performing that exercise- watching Japanese Criterion films- for more than five years and I have yet to find one that I’d consider a bad movie. I don’t think there’s even one that’s average. They’re all tremendous. Japanese arthouse cinematography is stunning, and there’s a brilliant choreography to the on-screen action that you don’t find in most of the rest of the world. More amazing about that statement is that I’ve barely tackled Ozu. The majority of what I’ve said about Japanese cinema applies to a world that doesn’t involve Ozu. 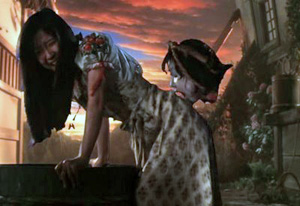 There’s not much out there that’s as fun or wonderfully jacked up as Hausu.

The stories are tremendous as well. So many focus on feudal Japan, and they strike at the heart of human existence. They’re stories about honor, social norms, family, and familial roles. In short, they’re universal themes that span eras, and yet they all have a uniquely Japanese thumbprint. In the case of Kurosawa and many others, the films aim at a level of metaphor that relate on a global level. But there’s more than just that. If you want experimental cinema, Criterion’s bag of Japanese cinema offers Hausu (1977). If you want horror- smart horror- Criterion offers a trilogy of films from Hiroshi Teshigahara. If you want ghost stories, some of the best ever made are Japanese films in the Criterion Collection- Ugetsu (1953), Kwaidan (1964), and Kuroneko (1968).

If you love cinema and you’re unfamiliar with the Japanese films that Criterion has to offer, you owe it to yourself to give those films a try. You won’t be disappointed.

19 responses to “Japan and the Criterion Collection: A Winning Combination”