The Recurring Motifs of French Cinema

Watch any genre or sub-genre enough and you’ll eventually pick up several recurring elements and themes. Prime example: cop films and low angle shots, occasionally of helicopters. Hot Fuzz (2007) famously spoofed it from Bad Boys (1995). Having watched an absurd amount of French films in the last 50 days, I can assure you that French cinema is no different. Here are some recurring themes that appear all over the history of French cinema.

Restless Youth
The French love it when their kids are rebellious and troubled, a little more adult than their counterparts in other countries. The most famous example is obviously François Truffaut’s The 400 Blows (1959). But Truffaut was echoing Jean Vigo’s Zéro de Conduite (1933). A decade after Truffaut’s seminal masterpiece, he co-produced another monumental film about restless youth, Maurice Pialat’s L’Enfance Nue (1969). Pialat struck again in 1983 with A Nos Amours. Louis Malle tapped into the restless youth reservoir three separate times- Murmur of the Heart (1971), Lacombe Lucien (1974), and Au Revoir Les Enfants (1987). René Clément got into the action with Forbidden Games (1952), and Robert Bresson made his entry with Mouchette in 1967.

Visual Trickery
This particular theme was most prevalent for six decades, starting with the father of special effects, Georges Méliès, in the late 19th century. Méliès’ feats were astounding, and established the template for special effects both in France and the rest of the world. Abel Gance followed through the age of French Impressionism with heavy use of camera motion, photo filters, triptych, and superimposition. Luis Buñuel’s most notable work, Un Chien Andalou (1929), is riddled with visual trickery in an attempt to shock audiences, an effort he continued in L’Age D’Or in 1930. At that point, Jean Cocteau took the baton and ran with it in his Orphic trilogy- The Blood of  a Poet (1930), Orpheus (1950), and Testament of Orpheus (1959). Directly in the middle of that trilogy, Cocteau made the special effects-laden La Belle et la Bête in 1946. The trickery has continued even today, with Jean-Pierre Jeunet orchestrating bizarre, askew worlds in films like Delicatessen (1991), The City of Lost Children (1995), and even Micmacs (2009). 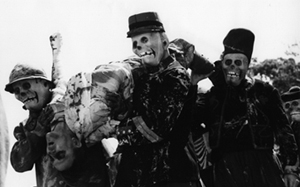 Anti-War Films
The first three major movements of French cinema each boasts at least one anti-war film. Abel Gance’s J’Accuse (1919) and Raymond Bernard’s Wooden Crosses (1932) were bookend anti-war films in the age of French Impressionism. Poetic realism provided one of the most timely anti-war films, and perhaps the best, with Grand Illusion (1937) on the verge of World War II. The French New Wave added Les Carabiniers (1963) to the canon. The Sorrow and the Pity is a stunningly thorough anti-war documentary. And more recently, Joyeux Noël (2005) took a decidedly anti-war stance.

Conceptual Surrealism
The most prominent examples are all from Buñuel, who established his career as a monument to surrealism. In addition Un Chien Andalou and L’Age D’Or, Buñuel’s French surrealist works include The Phantom of Liberty (1974), The Discreet Charm of the Bourgeoisie (1972), and The Milky Way (1969). Alain Resnais carried on the grand tradition with films like Hiroshima Mon Amour (1959) and Last Year at Marienbad (1961), each using surrealist concepts to convey the shaky nature of memory. La Grande Bouffe (1973) is surrealist, if less overtly. Cocteau denied being a surrealist though it’s hard to ignore the elements in his films. More recently, La Moustache (2005) carries the motif. René Clair’s Entr’acte (1924) is a cornerstone of the movement. 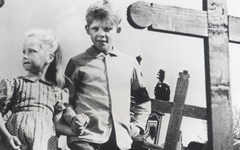 World War II Guilt
All of Europe dealt with the post-war era in their own way. In France, it mostly manifested itself as guilt. Forbidden Games and Au Revoir Les Enfants took a look at what it did to the children. Le Corbeau (1943), Lacombe Lucien (1974), and Children of Paradise (1945) mocked Vichy collaborators. And The Sorrow and the Pity (1969) put all of it on display.

Algeria
Banyuls-Sur-Mer on France’s southeastern coast is just 400 miles from Algiers, Algeria. The French held Algeria as a territory into the 1960s, and it caused loads of problems. As a result, the French-Algerian conflict, and Algeria in general, shows up all over French cinema. Pépé le Moko (1937) features a Parisian gangster hiding out in Algiers. The Battle of Algiers (1966) deals directly with it and places terrorism on full display. Godard’s Le Petit Soldat (1960) was his take on the Algerian crisis. The last decade has seen a rebirth of the theme, appearing in several films.

Shocking Content
It’s easy to point to the New French Extremity in the last 15 years as providing shocking content. And there’s no doubt that directors like Gaspar Noe (I Stand Alone, Irreversible), Catherine Breillat (Fat Girl), and Xavier Gens (Frontiers) have added a great deal to the amount of shocking content coming out of France. But they weren’t the first, or even close to it. Luis Buñuel’s two surrealist titans- L’Age D’Or and Un Chien Andalou– horrified audiences at the time. Louis Malle tackled incest (Murmur of the Heart) and suicide (The Fire Within, 1961). Malle’s The Lovers (1958) was banned in locations throughout the United States for explicit sexual content. The Battle of Algiers was startlingly frank with regard to terrorism. Even one of the very first movies ever made, a documentary no less, caused audiences to fear that a train was about to run them over in Arrival of a Train at La Ciotat (1896).

17 responses to “The Recurring Motifs of French Cinema”