Who Would Win in a Fight?

The Munchkins from The Wizard of Oz vs. The Oompa Loompas from Willy Wonka
I actually posed this one for Ask the Lamb and got some great answers. Personally, I think the only real advantage that the Munchkins have is that the Oompa Loompas probably have diabetes from all of their chocolate consumption. And while that’s a significant edge, I can’t see it being enough to win the battle.
Edge: Oompa Loompas 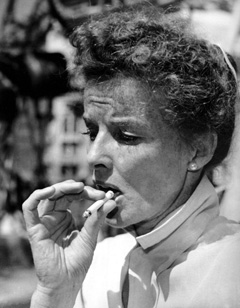 Mess with this woman at your own peril.

P.T. Anderson vs. Wes Anderson
Like the two Hepburns, there’s a name similarity. But they’re also both indie film directors who made their debuts in the 1990s. Based on physicality alone, P.T. seems to have the advantage. Wes is sort of a string bean. While I wouldn’t expect P.T. Anderson to have the bulk to win a lot of these fights, I get the feeling he could break Wes Anderson in two. The only fact that even gives me pause is that Wes Anderson is from Texas, where people love to brawl. And maybe Wes Anderson could dig deep and summon strength from whatever reservoir he uses to keep making angsty childhood movies. But I doubt it.
Advantage: P.T. Anderson

John Belushi vs. Chris Farley
The link is obviously that they’re both really funny fat Saturday Night Live guys who died too young. Both did a lot of drugs, so there’s no real advantage there in either direction. That leaves their size and quickness. Farley could probably crush an average person. But in this case, Belushi is no average person. He has plenty of girth himself. And at least part of Belushi’s humor revolved around how nimble he was for a fat guy. I think Farley would take an early lead but eventually fall like a Sequoia. A very fat Sequoia.
Advantage: John Belushi

Buzz Lightyear vs. Woody
I can’t imagine Disney allowing this to happen, what with future toy sales at risk in a fight to the death between two of their icons. That said, this sure looks like a no-brainer to me. One of them can fly around and has lasers. The other has a cowboy hat and a lasso. Sorry, Woody. You’re toast.
Advantage: Buzz Lightyear

The Bride vs. Shosanna Dreyfus
Two women well-practiced in the art of badassery and revenge, each starring in their own Quentin Tarantino film, enter a room. As much as I appreciate the cold-hearted nature of Shosanna, she doesn’t possess anything approaching the fighting prowess of The Bride. Score a victory for Uma.
Advantage: The Bride

Sean Bean vs. Mr. Bean
There’s an obvious physical advantage for Sean Bean. He’s much bigger and stronger. You can even stab the guy and he’ll survive. But no matter how weakly Mr. Bean appears, there’s one important rule to remember. Sean Bean’s characters always die. In the end, his characters can’t pull it off. I don’t know how and it defies all logic, but somehow…
Advantage: Mr. Bean

Ray Kinsella vs. Crash Davis
These two Kevin Costner-played baseball movie icons present a fun challenge. In one corner, you have the insanity of hearing voices in a cornfield. In the other corner is a professional athlete who sets records. I’d be a lot more inclined to side with Ray Kinsella if the demonic voices in his head weren’t telling him to do stuff with corn and baseball.
Advantage: Crash Davis

Hannibal Lecter vs. The Mom from What’s Eating Gilbert Grape
The similarity here is that they both like to eat a lot of bizarre things. Ultimately, Hannibal Lecter would be robbed of his greatest strength- eating his enemy. I’m pretty sure he’d take one look at Bonnie Grape and pass up all the fat and gristle. And Bonnie Grape couldn’t be bothered to exert the effort to fight someone. This means it would come down to whoever actually lived the longest. And it still ends up being a victory for Hannibal Lecter.
Advantage: Hannibal “The CAAAAANNIBAAAAALL” Lecter (imagine that being said by that ring announcer guy)

Naomi Watts vs. Charlize Theron
Here, we have two blondes who rose to fame in the 1990s, each coming from part of the English-speaking world besides the United States or the UK. Purely in terms of the fight, Theron’s turn in Monster (2003) and Prometheus (2012) has me convinced that she would be vicious enough to finish off Naomi Watts. Realistically, Charlize Theron and Naomi Watts wrestling around with each other would be a victory for every straight male and lesbian female on the planet.
Advantage: Charlize Theron

John Wayne vs. Bruce Wayne
“Booo hoooo, my mommy and daddy died and I’m going to change my whole life because of it!”
Advantage: John Wayne

This is what the “horse-slaying technique” looks like. It’s deadly, apparently.

Zatoichi vs. Lone Wolf and Cub
One is a blind swordsman, the other is the world’s greatest dad paired with the world’s most deadly three-year old. They’re both really awesome icons of Japanese samurai cinema. Zatoichi’s edge is his heightened senses. Ogami Ittō and Daigorō’s strength is that there are two of them. Also, Daigorō (the “cub”; a baby) practices the deadly horse-slaying technique. Whatever it is, it’s deadly, so it must be good.
Advantage: Lone Wolf and Cub

Luke vs. Anakin Skywalker
We all know that Luke would win this. To hell with Anakin. Luke was sort of whiny about the responsibilities ahead of him but Anakin took it to a whole other level. I spent nine hours of my life listening to Anakin whine. “Where’s my mommy?!?”, “I can’t live without Padmé”, “Jar Jar Binks is my friend”… What a travesty. Sure, the ewoks were a bit cutesy, but Tim Bisley in Spaced nailed it when he said “Jar Jar Binks makes the ewoks look like fucking Shaft!”

Oh, and by the way- only one of these Skywalker characters took a shit on a beloved franchise. Somehow we’re supposed to believe that this annoying little asshole became one of the biggest villains in movie history. How? Because his mother died? Because he couldn’t get over his idiotic teenage puppy love? Because the Jedi Council didn’t feed his monstrous ego quickly enough? Because he was portrayed in the most wooden way possible? What was it that turned him into Darth Vader? Surely what was shown to us isn’t the answer because if it is, then a movie franchise that we all loved was demolished in a matter of hours, mostly in the interest of selling toys. Fucking Anakin.
Advantage: Luke Skywalker

So what do you think? Who would win these fights? What other pairings would you like to see?