When I first saw the list of classic, iconic horror films that were filmed at Universal, I had the same reaction as Homer. “Right. All filmed by a wonderful, ‘magical’ studio.” But it’s true. An impressive and influential list of American horror films all came from that same wonderful, magical studio. As if that wasn’t enough, they were all filmed to varying degrees on Universal’s backlot. 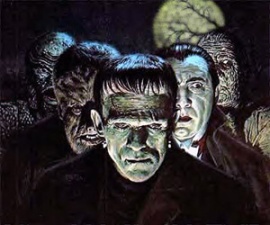 These guys were all born on Universal’s backlot.

Before proceeding, let’s establish the groundwork. Here’s a list of classic Hollywood horror films that were made on Universal’s backlot: The Hunchback of Notre Dame (1923), Phantom of the Opera (1925), Frankenstein (1931), Dracula (1931),  The Mummy (1932), The Bride of Frankenstein (1935), The Wolf Man (1941), The Creature from the Black Lagoon (1954), and The Birds (1963). Even the crumbling and creepy house from Psycho (1960) rests on the Universal backlot, despite the fact that it was originally a Paramount film. It’s as if the horror Gods looked upon Psycho and said “Paramount? Nah. It belongs with Universal.” For good measure, even Gremlins (1984) and Abbott and Costello Meet Frankenstein (1948) were filmed there, neither classic horrors but both worthy entries in the genre (or comedy-horror genre in Abbott and Costello’s case). 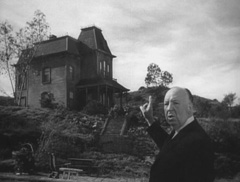 This quaint little fixer-upper rests on the Universal backlot. Beware the owner.

It’s where Hollywood figuratively took the baton from German Expressionism and started crafting their own terrifying tales. It was a petri dish of sorts (forgive the multiple metaphors), where Hollywood could test out new ideas and find new ways to draw audiences to the theater, develop new icons, find new stars, and enhance film techniques when the medium was still young. Those backlot horrors are the missing link between early European film and American film noir.

It’s quite a legacy that Universal crafted in the early days of cinema, one worth a great deal of reverence. This October, you will invariably stumble upon one of these films. When it happens, raise a glass to horror’s petri dish- the Universal backlot. 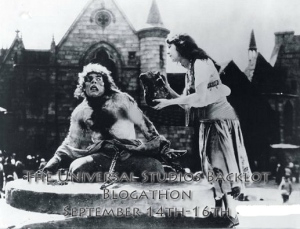