Bless me, father, for I have sinned. My last confession was… well, never. I’ve never confessed TV sins, or any sins of any kind.  And actually, I have no clue how to give a real confession because I’m not Catholic. But I do have some TV confessions to make. Have mercy on my soul. Just don’t expect me to repent.

I’m not watching Homeland, and I’m not sure I ever will. The accolades keep pushing me a little bit closer to checking it out, but there’s nothing about the premise of the show that interests me at all. Al Qaeda possibly turned a soldier and then a bunch of espionage ensues, or something. That’s not my cup of tea. Mind you, that’s not a knock on the show. I haven’t even seen it, and it’s gotten too much critical acclaim for there not to be some merit to it.

I got a little choked up during the series finale of Cheers. I don’t know why but it made me really wistful in an overly dramatic, dumb way. What can I say? It was the first show that I watched pretty much from start to finish, and I figured I’d miss Sam, Carla, Norm, Rebecca, Cliff, Frasier, and even Paul. Little did I know every single episode would be available in syndication hundreds of times ever since.

Sundays are sacred. You have no idea how many social events I’ve passed up on that basis alone. It takes something really special to get me to do anything on a Sunday evening. It all started with The Simpsons, and continues to this day. And that’s because all of the best shows air on Sunday nights. So Sunday is my day to do laundry and prepare for the week ahead, all while checking in on my favorite TV shows. 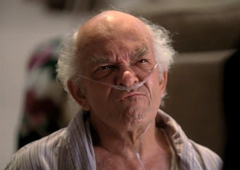 Tio showed just about the same level of emotion that I did.

I pumped my fist when the bomb went off at the end of season 4 of Breaking Bad. And if you’ve seen it, you know the bomb I’m talking about. That’s how much I was sucked into the show- I literally jumped up out of my seat and pumped my fist. Then I stopped and thought to myself, “Did I really just do that?”

Despite all of the bitching and moaning I’ve done in the few years about how bad True Blood is, I still watched the most recent season. I swore up and down that I had given up on the show… and then I had nothing else going on when the latest season started. So I wound up watching it anyway. It was every bit as bad as the other seasons, but at least now I know better than to make any promises that I won’t watch next season, even knowing full well how crappy it’s going to be.

Season 6 of Dexter is commonly viewed as the worst, but I actually liked it. People can bash it all they want for having an obvious twist and a ham-fisted religious message. I don’t disagree. I still enjoyed the serial killer duet, the Doomsday Killers, because they provided sufficient creep to their kills. And most importantly, the season finally concluded with something that I wish had happened a long time ago. Bashing one season of Dexter in favor of another because of bad writing seems odd to me, anyway. Most of the seasons are ridiculous and poorly written. It’s not why I watch the show. I watch it in spite of that stuff and season 6 was no different.

It starred Bob Uecker. How can a young baseball nerd NOT watch a TV show starring Bob Uecker?

I watched an outrageous amount of sitcoms as a kid, and several were bad. The mostly complete list: Alf, Mr. Belvedere, Growing Pains, Family Ties, The Cosby Show, Night Court, Cheers (of course), Benson, Who’s the Boss?, Coach, Married… with Children, Perfect Strangers, The Wonder Years, The Jeffersons (I wanted to be George Jefferson when I grew up), and Charles in Charge. It’s a good thing I kicked the habit of watching too much TV.

I thought Friends sucked. There. Now it’s off my chest. I didn’t think it was funny. I thought it was an awful paint-by-numbers “comedy” that used demographics and market research to dictate the humor. “What’s the most bland slightly funny thing we can have happen that will appeal to the most 18-to-30 year olds?”

When I was a kid, I was obsessed with The Dukes of Hazzard. Cut me some slack. I lived in South Carolina for most of the run of that show. To me, it might as well have been a documentary.

I didn’t watch Rome, Carnivale, Deadwood, and most importantly, The Wire until all of them were off the air. On the surface, this doesn’t sound like much of a sin. But the first three were axed at least partially due to lack of interest, and The Wire had problems finding an audience as well. All four (especially the fourth) were amazing shows. Basically, by not watching them when they were on the air, I was part of the problem.

I don’t like cop shows. It was a family event for us to all sit down and watch Magnum, P.I. when I was a kid. And that was the last network cop show I ever cared about.

23 responses to “The TV Confessional”