It’s time yet again for the article that’s easy for me and fun for you- Fun with Netflix Viewer Reviews! Here’s volume twenty of people writing really funny Netflix viewer reviews. These are presented completely unedited. Even when you think I might have edited something in or out of the copy, I assure you that I have not.

Abraham Lincoln: Vampire Hunter (2012)
Spoiler alert…Abraham Lincoln doesn’t achieve immortality by being via vampire bite but rather succumbs to a gunshot wound during a play at the Ford Theater…which is exactly what should be the fate of the producers and director of this movie..

A Woman is a Woman (1961)
i WATCHED THIS MOVIES BECAUSE OF THE REVIEWS. I WISH I DIDN’T THIS MOVIE LEFT ME AT A LOST FOR WORDS AND NOT IN GOOD WAY. WOW….

Babe: Pig in the City (1998)
Unlike it’s predecessor, “Babe”, “Babe: Pig in the City” coins a new genre. ‘Noir films for children’. I suppose if you want surreal gritty urban realism that harkens back to Dickens, then go for it. I am not for sanitizing children’s fare, creating saccharine-only cinematic experiences, or talking down to children content-wise, but there are images here, particularly the sequences of cruelty to animals, that are gratuitously disturbing, simply superfluous and unnecessary in their graphic power to upset and dismay.
Editor’s Note: There’s nothing inherently funny in this review but now I totally want to see Babe: Pig in the City. 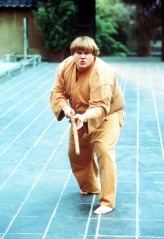 I love Chris Farley as much as anyone but even I think that reviewer is crazy.

Beverly Hills Ninja (1997)
This has got to be the best movie i have seen in a long time. I’m a huge fan Kung-fu comedies,but an even bigger fan of Chris Farley.This move has a couple of good action bits but overall its 90% pure raw slapstick comedy the other 10%? CHRIS FARLEY COMEDY MAGIC WARNING: DO NOT LISTEN TO CRITICS THEY GAVE THIS STARS (probably shouldnt have mentioned that) ———- WATCH THIS MOVIE ————

Star Trek II: The Wrath of Khan (1982)
I loved it. It was much better than “Cats”. I would watch it again, and again.
Editor’s Note: If you get this review/SNL reference, I’d like to high-five you.

The Nutty Professor (1963)
One of the worst films I’ve ever seen. More of a horror film than a comedy ie. the film was horrible and not at all funny. Not 1 ha. I rate it -20

Iron Eagle II (1988)
I hate this movie but I am a plane love so it is col for me! If only it could chage the f-16c into some other plane, that will be awesome!

John Wayne’s Tribute to America (1970)
As corn-ball as hell as it seems. This TV Special shows how history was told in bicentennial or pre bicentennial times it was made in. Including inclusiveness that would not fit in our Post-Racial years we live now. For John Wayne to give Tommy Smothers a voice after CBS unceremoniously trashed him is priceless. The vintage Budweiser ads are included as an extra. True to be a Tea Party delight. I give it a enjoyed and watched thoroughly.
Editor’s Note: In other words, GET OFF MY LAWN!!! 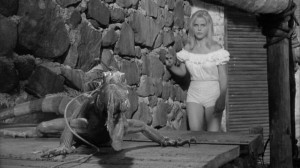 Amazingly, there WAS an iguana in Night of the Iguana. But there was also lots more booze and beautiful women and lost faith and Mexico.

The Night of the Iguana (1964)
I watched almost this whole movie waiting for the iguana to make an entrance. Never did show up. If it was really the night of the iguana he had better things to do.

The Third Man (1949)
I first viewed this film in 1949, the year it came out and we all thought it broke new ground even then.Now,63 years later the film still has all the same charm.Truly a ground breaker,it has all the movement and directorial technique of the 21th century. A masterpiece,if there ever was one.
Editor’s Note: Absolutely nothing funny here in this review, although it may be the coolest movie review on Netflix. That is the ultimate in Re-Watchterpiece Theater. And, of course, he/she is right about the film.

Alive (1993)
How do you like your human? Rare, medium or well done? Unfortunately, the poor main characters in this flick did not even have a choice. I think we have all, at one time or another, had a friend for dinner but this film tells the tale of a rugby team that prepared a most unique dish. Overall, I think the creators of this film blended graphic realism with drama very well. The acting was poor in some scenes but it kinda made me crave a rump roast served cold and very, very, VERY rare!