Friday night, I went to the baseball game with my friend. At one point, we started to discuss what was on the docket for our movie weekends. I hadn’t really planned any sort of chicanery. There was no intention of having a bizarre, wild mix. And yet, it ended up being one of the more diverse, unholy movie weekend batches I’ve ever cooked up. On the docket: a 90s b-horror about an evil ice cream man, the wholesomiest of wholesome American musicals, two surrealist masterpieces (one about gay Nazi bikers), an indie film about serial killers, and an overlooked 90s indie classic. And that doesn’t even include my missed chance at seeing the popular kids movie-du-jour. This is the movie weekend that was.

Out of Sight (1998)
Out of Sight is without a doubt a 1990s film, from the score to the cast to the crime/comedy caper plot. That’s a good thing in my book- those kinds of films fit me like a glove. Watching Out of Sight, it was impossible not to think of Get Shorty, The Big Lebowski, Grosse Pointe Blank, Jackie Brown, and a whole host of other 90s crime-comedies. Steven Soderbergh created a nifty little crime/romance/comedy with just the right dash of style and a very clean, but smart, screenplay. It was also quite an impressive cast. And by “impressive cast”, I mean “Hey, neat! It had Albert Brooks and Don Cheadle!” Surprisingly, J-Lo didn’t sink it, either. That may have been her best performance. (low bar, I know)
Rating: 4 out of 5 stars

“In heaven, everything is fine.”
-The Lady in the Radiator

Eraserhead (1977)
I have something of an odd relationship with David Lynch. It’s not that I dislike Lynch. Far from it. But I never really “got” Lynch. And I finally figured out what it was. It’s that he dabbles in the surreal, but there’s a healthy dose of traditional narrative structure mixed in. He doesn’t sell out in either direction. And that brings me to Eraserhead, a movie that almost COMPLETELY sells out to the surreal. And I loved every minute of it. It’s an orgy of sexual symbols and loose archetypes- vomiting chicken, giant sperm-shaped objects splattering against the wall, sperm-shaped baby heads replacing human heads- that all mesh together to form a greater whole, not unlike Buñuel’s The Phantom of Liberty. Frankly, seeing Eraserhead makes me want to revisit a lot of the rest of his work. In the very least, I wish I had seen Eraserhead before venturing out into his other films.
Rating: 5 out of 5 stars

Yankee Doodle Dandy (1942)
There’s sort of an interesting effect with Yankee Doodle Dandy. We’ve reached a point in human existence where corny enthusiasm is basically frowned upon. I know I frown upon it. That said, Yankee Doodle Dandy was made in a different time and place. I can appreciate it as basically a rallying cry during the war era, and good for 1940s Hollywood for cooking up a movie that wasn’t just another war movie. I can forgive its corny enthusiasm. Where I struggle, of course, is that it’s a musical. And now we can add another acclaimed musical to the great big pile of musicals I didn’t enjoy. That’s not to say it made me nauseous like, say, Funny Girl (1968), but I’m glad I can cross this off a list and never deal with it again.
Rating: 3 stars out of 5, I guess?

Scorpio Rising (1964), and other short films from Kenneth Anger
Rewind to my Friday conversation about my weekend movie docket. I mentioned that I might be getting my introduction to Kenneth Anger to my friend, and he merely shook his head and said “Oh boy.” It’s easy to see why he said that. Here’s the Scorpio Rising description on IMDb:

An army of gay/nazi bikers make their engines roar and ride the way to pain/pleasure as sexual and sadistic symbols are intercut into the dazing chaos and rhythmic experiences of this underground film by cult director Anger.

Of course, my friend also mentioned that Scorpio Rising had played a major role in the way the counterculture embraced biker culture, James Dean, and Marlon Brando, and that the film had been a major influence on some heavy hitter filmmakers. And it’s only a 28 minute film, more or less a music video about bikers. If you could take all of the best parts of Martin Scorsese’s music segments from his films and cram it all together into a 28 minute short/music video about bikers, that’s Scorpio Rising. Oh, and for good measure, there are clear influences on Scorsese, Andy Warhol, Easy Rider, and even Drive (2011), amongst others. It was really an amazing experience, highly recommended.

The rest of the disc included Kustom Kar Kommandos (1965), Invocation of My Demon Brother (1969), Rabbit’s Moon (1979 version), and Lucifer Rising (1981). These were all a trip. Anger’s homosexuality is definitely in the viewer’s face at times, likely making him one of the first filmmakers to do that. There’s also a heavy dose of… for lack of a better phrase, Satanic ritual running through these shorts. Of the four beyond Scorpio Rising, the most iconic and probably well-known is Lucifer Rising. My personal favorite was Rabbit’s Moon, a bizarre and awesome mash-up of a very British and very 70s song- “It Came in the Night”, from A Raincoat- and Anger’s silent horroresque footage from the 1950s.
Rating: 5 out of 5 stars for Scorpio Rising; 4 out of 5 for the whole disc

The Snowtown Murders (2011)
Let’s get the facts out of the way first before the digression begins. I wasn’t particularly a fan of The Snowtown Murders. I didn’t hate it, there were a few things I liked about it, but ultimately it ended up right in the middle for me. As for the digression, there’s probably a reason for my reaction. Namely, a lot of these IFC releases have the same look and feel. The subject matter- Australia’s “worst serial killer”, per the Netflix description- is intriguing enough. But there seems to be some sort of indie film boiler plate floating around in the last 10 years or so, and they all melt together into a flat mush of similar scores, similar camerawork, and similar themes (pick your flavor- quirky! or disturbing!). I don’t know why this particular film is the one that made me stand up and point it out, because frankly this is a storm that’s been brewing in my head for a while now.
Rating: 3 stars out of 5 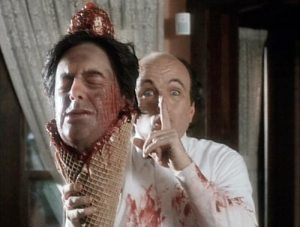 Shhhh…. don’t tell anyone else that this is a shitty movie. Let them find out for themselves like I did.

The Ice Cream Man (1995)
Of course, the second I finished The Snowtown Murders and started The Ice Cream Man, I instantly started to regret my harsh feelings about The Snowtown Murders. The Ice Cream Man is the kind of movie that makes you shake your head and say, “Wow. Just… wow.” Clint Howard- Ron’s kid brother- plays an ice cream man whose psyche is warped from years in the world’s worst mental hospital. And believe me, the film never lets you forget that Clint is Ron’s brother because the phrase “happy days” is uttered tens of times, and was part of the root of what drove the ice cream man crazy. Along the way, Jan Michael Vincent does some stuff as the cop trying to track the ice cream man down, and there are a lot of hilariously over-the-top gore scenes. Most notable is a slow-motion clip of a cop eating an ice cream cone with a human eye in it. Additionally, Steve Garvey- yes, THAT Steve Garvey, former Major League baseball player- has two minutes of screen time. I have to admit, as horrible as The Ice Cream Man was, I had fun with it. I guess you might say that it… DIDN’T LEAVE ME COLD. (sorry, it had to be said)
Rating: 1 glorious shining shitty star out of 5

13 responses to “The Movie Weekend That Was”