Quick Thoughts on The World’s End

I’ve written about it several times over the last year and a half. The TDYLF banners this week have shifted as a tip of the cap to it. I even drove 6 hours away and spent gobs of money drinking in its honor. But once I finally got to see The World’s End, did I actually like it?

-Simon Pegg and Nick Frost are both tremendous in The World’s End, displaying an impressive range. We’ve seen a lot from Pegg through the years but we’ve never seen him play a heartbreaking, emotionally lost character like Gary King. However, he never gives up his standard panache for humor. Frost expertly blends stoicism and reservation as the ultimate sidekick, Andy Knightley. Seeing Frost hulk out, especially, is a treat and it’s something we haven’t really seen him do. Both actors own giant segments of their film, and they saved their best work for last in the Cornetto Trilogy.

-The fight sequences in The World’s End stand out, possessing a unique choreography with just the right dash of humor. I recently saw a review in which Marc Ciafardini of Go, See, Talk referred to it as “Hong Kong styled“, and he’s spot-on. 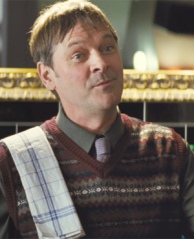 -As a massive fan of Edgar Wright, it was pure joy to see so many Wright alums make appearances. The film features Julia Deakin, Reece Shearsmith, Michael Smiley, and Mark Heap, all from Spaced. Actors from his previous films include Rafe Spall, David Bradley (Game of Thrones fans will love seeing him again), and Bill Nighy. And of course, Paddy Considine and Martin Freeman have major roles.

–The World’s End takes more serious, dramatic turns at times in a much heavier way than Wright’s other work. This isn’t bad at all, but it caught me off guard.

-It wouldn’t be a Wright film without a symphony of genres, all stitched together seamlessly. At various times, The World’s End is comedy, science fiction, horror, drama, and pure action.

-The film doesn’t wear its references on its sleeve as much as the first two Cornetto Trilogy films. The funny thing is that nobody would’ve blamed them if they’d made a third film that feverishly tips its cap to other films. It is, after all, part of why those films are so lovable. But now I’m very excited about seeing the direction of the rest of their careers as writers, directors, and actors.

-I saw it in almost perfect environment for the movie to be successful, as part of the full trilogy in a theater filled to the rafters with Cornetto Trilogy fans. After several hours of Shaun and Fuzz, the mood was just right for The World’s End. It also made for a unique viewing in that you could see their skills and abilities grow with each film, jumping from 2003 to 2007 and then finally 2013.

The face of raw humanity

-One element that’s sticking with me is that, like all good sci-fi, it bears social commentary. What makes it so tricky, unique, and fun is that the rebellious, rabble-rousing, troubled Gary King ultimately represents the most raw humanity in the face of boring domestication at the most critical junctures of the film. I won’t say more but you’ll see what I’m talking about when you get around to the film.

-Overall, it’s a film that excels on so many levels. The cast is nearly perfect from top to bottom, the action sequences will have you on the edge of your seat, and hilarious moments abound. I suppose if I had one criticism, it’d be that it’s not as fun as Shaun or Fuzz, but that’s an almost impossible standard. And it’s moot anyway because The World’s End succeeds in ways that the other two don’t.

15 responses to “Quick Thoughts on The World’s End”