August was an extraordinarily busy month. At various points in the month, I took trips to Cincinnati, Madison, Chicago, and the Ozarks. That was in addition to it being a professionally busy month. Needless to say, despite all of the fun, it left no time whatsoever for movies. This weekend was the first opportunity that I’d had in seemingly forever to do absolutely nothing but watch movies (and some college football, but I won’t bore you with that). It was a catch-up weekend, full of subtitles, aging, family drama, Rob Zombie, and the completion of a foreign trilogy that WASN’T Edgar Wright-related. This is the movie weekend that was. 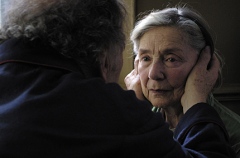 Amour (2012)
Of last year’s Oscar contenders, Michael Haneke’s Amour has been my great white whale. I’ve either lacked the ability to see it, or the motivation, for quite some time. But when it showed up on Gaspar Noé’s Sight and Sound list, I was resigned to watch it. It is an absolutely devastating and devastatingly effective film. It turns its insightful gaze onto a subject we all know about, yet rarely talk about, as if it’s a pornography. Namely, Amour deals with aging; the point at which the quality of life diminishes beyond any sort of reasonable expectation; and those that are left to cope. It’s a phenomenally human film. And had I seen it before last year’s Oscars, I would’ve championed it as my preference for Best Picture.
Rating: 5 out of 5 stars

There was a Father (1942)
I have no idea how this happened, but I saw both Amour and There was a Father as something of a double feature on Friday. I assure you that it was not my intention to watch four hours of familial sacrifices and aging, but there you go. It happened. There was a Father is Yasujiro Ozu’s film about a widowed father who must send his son away to boarding school, while the father works hard in Tokyo to provide the best possible education. Ultimately, the father misses the chance to see his son grow up but provides the best possible future for him. And naturally, the son becomes the father by the end of the film. It’s basically “Cat’s in the Cradle: The Movie!” Apparently, this film was approved by Japanese censors during World War II because it fit the propaganda of the importance of sacrifice for family, which… kind of sucks to know about. I doubt Ozu had any interest in his film being used in any sort of propagandistic way. I still can’t particularly say that Ozu clicks for me, but neither would I deny the inherent skill in his work. I was particularly impressed with this synchronized fishing segment with father and son:

Jalsaghar/The Music Room (1958)
As of this writing (Saturday night), I have seen four Satyajit Ray films and each one has left me impressed. He’s slowly but surely creeping his way onto my list of favorite directors. Jalsaghar/The Music Room is Ray’s most critically acclaimed film beyond the Apu trilogy, and it shows. It’s the tale of an elderly landowner who has let his estate fall into decay, the result of an overly decadent appreciation for music and concerts, combined with the loss of his son and wife. If you could somehow squish The Leopard (1963) and Wild Strawberries (1957) together and give it a Bengali flair, you’d have Jalsaghar. Ray’s use of animals/nature/creatures for symbolism is rich, and the score is sublime, perfect for the film. I suppose if I had one gripe, it’d be that the final musical scene was extraordinarily long, but that’s minor in the big picture. If you’re interested at all in world cinema and classic art house, Satyajit Ray and Jalsaghar are a must.
Rating: 4.5 out of 5 stars

Robot and Frank (2012)
Admittedly, Robot and Frank possesses a lot of the quirky indie veneer that I’ve come to find annoying in recent years. But it’s well-executed, and there’s absolutely no denying that it’s a unique idea. In short, it’s effective even if it does flirt with indie clichés. It was apparently the feature film debut for both director Jake Schreier and screenwriter Christopher Ford, and it’s a clever enough idea that I’ll keep an eye out for their future work.
Rating: 3.5 out of 5 stars 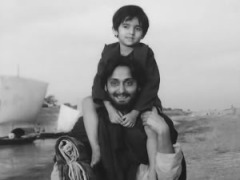 The World of Apu (1959)
Satyajit Ray strikes again, this time wrapping up the Apu trilogy. Having seen all three now, I can honestly say that I don’t think any director in film history has tortured and destroyed his own character’s psyche as much as Ray did with his Apu. Through three films, Apu loses his sister, his father, his mother, his wife, and endures poverty pretty much throughout. And yet, at the end of it all, he emerges smiling, facing his future and his responsibilities with his own young son. It’s powerful stuff, really. And I have no doubts that if Ray had ever made a fourth Apu film, the kid would’ve died. Thankfully, it never came to that. The World of Apu was a perfect ending to a brilliant trilogy about a troubled, yet hopeful, child coming of age and reaching adulthood.
Rating: 5 out of 5 stars

The Lords of Salem (2012)
I never know what to do with Rob Zombie’s films. The handful that I’ve seen have left me entertained, but so much of what happens in his movies seems childish. It’s often shock for the sake of shock. The Lords of Salem veers into a little different territory, employing some really great atmosphere and imagery (in place of the shock). Film any horror movie in New England in the fall and you’ve got me hooked to some degree. Unfortunately, it never meshes together as a whole. It’s simply a series of really cool atmospheric horror scenes thrown at the screen. And then it collapses in on itself into chicanery and an unsatisfying ending. With October just around the corner, you could do worse than The Lords of Salem. But you can surely do better as well.
Rating: 2.5 out of 5 stars

17 responses to “The Movie Weekend That Was”