The Criterion Top 10 Series rolls on. As I mentioned yesterday, over the next few weeks, I’ll be running contributions from some of my favorite film critics, writers, and theorists from around the internet. Each writer will list their top 10 from the Criterion Collection, mirroring Criterion’s own Top 10 series. Today’s article is a real treat, coming from filmmaker Alex Withrow. While most of us enjoy watching and discussing film, Alex is down in the trenches actually making them, having moved to Los Angeles last year to continue his dream. He has written and directed two shorts- Full Circle (2008) and Earrings (2012)– and is currently in post-production on his third film, Wait. Moreover, Alex has a tremendous site, And So It Begins, which regularly features incredible in-depth articles about directors, actors, essays, and film reviews.You can (and should) find his films here, and follow him on Twitter @shiftingPersona.

ALEX: All of the films listed below are classic works of cinema. However, the fun of listing your Top 10 films within the Criterion Collection is that you have a chance to look beyond the brilliance of the films themselves. So, concerning my picks, I’ve taken a few things into account: the quality of the film, the technical presentation of the film, and the substance of the disc’s respective special features. Although there are other films within the Criterion Collection that I like more than some of my picks below, these films best encapsulate the entire Criterion package. Enjoy! 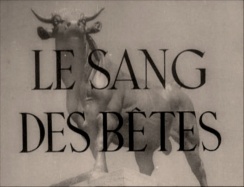 10. Night and Fog (1955), Alain Resnais/Eyes Without a Face (1960), Georges Franju
My first pick is a slight cheat, as they are two short films that present horrific acts of violence with shocking, purposeful detachment. Night and Fog is a brutal documentary that blends beautiful color shots of vast fields, with black and white footage of the Holocaust concentration camps that occupied those fields 10 years earlier.

The second film actually isn’t Eyes Without a Face (which is a splendid little horror film in its own right), but a special feature on the Eyes Without a Face disc, Franju’s first film, Blood of the Beasts. Blood of the Beasts is 20 minute documentary about slaughterhouses in Paris. The film opens with oddly gorgeous shots of a war-torn Paris, then, without warning, jumps inside a slaughterhouse and documents the carnage through an impassive lens. Both Night and Fog and Blood of the Beasts are extremely difficult to watch, but necessary experiments of the violence humans can inflict, no matter the reason.

9. Vivre sa vie (1962), Jean-Luc Godard
My favorite Godard film, presented in a flawless high-def transfer, which only enhances the magic of Anna Karina’s performance. Packed with tons of special features, including an amusing TV interview with Karina, and an excellent commentary track from film scholar Adrian Martin, Vivre sa vie is by long and far my preferred Godard Criterion. I can’t get enough of it.

8. Seven Samurai (1954), Akira Kurosawa
This was a tough choice, because while I believe Rashômon to be Kurosawa’s best film, this edition of Seven Samurai is the more comprehensive Criterion. The plentiful features – my favorite being the 50-minute Making Of – are a must for fans of Kurosawa’s work. Also, the restoration of this film (namely on the Blu-Ray edition) makes the final, laborious battle that much more thrilling. The rain, so thick. The screams, so loud.

7. Do the Right Thing (1989), Spike Lee
Above all else, this Do the Right Thing Criterion is a continual must watch for anyone with a remote interest in filmmaking. The disc’s exhaustive, fascinating Making Of features are some of the best I’ve ever seen, and the commentary by Lee and other members of the cast and crew is endlessly compelling. But perhaps the most worthwhile feature is the shocking Cannes Film Festival press conference, in which Lee and his cast are berated with mortifying questions. I’ve never seen anything like it.

5. 8 ½ (1963), Federico Fellini
Fellini’s 8 ½ is a film experiment unlike all others – a consuming puzzle that I so dearly crave. Thankfully, the massive crop of features is enough to satisfy the most insatiable Fellini fan. I’ve always adored this film, but it wasn’t until I made my way through this entire Criterion package that I grew to truly, irreversibly love it. Again, a must own for whose interests extend past just watching a film.

4. Three Colors (1993; 1994), Krzysztof Kieślowski
Kieślowski’s Three Colors: Blue, Three Colors: White, and Three Colors: Red are a trio of the finest films ever made. Here, Criterion packages them together in a gorgeous box set. My favorite way to rediscover these films, which I do every few years, is to reserve a whole day, and watch them back to back to back. I end my marathon with some of the many features within the set. I can’t stress my appreciation for these films enough, they define the very best of what contemporary cinema has to offer. 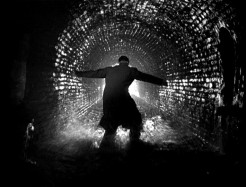 3. The Third Man (1949), Carol Reed
There’s a reason I keep harping on the special features in these Criterion films. Because buried within these discs is everything an eager mind needs to craft their own film school. If you want to know how greatness is made, then look no further than these Criterion features. The Third Man may be the best example of this, as it is stocked with engaging, insightful, and educational features that will help filmmakers of any age develop their skills. Start with Steven Soderbergh and Tony Gilroy’s impeccable commentary. Commentary tracks simply don’t get better.

2. The Thin Red Line (1998), Terrence Malick
The Thin Red Line was a film I always wanted to know more about. In my formative years, the movie became a staple; I watched it often and studied its every move. When Criterion released their edition of the film a few years ago, I was first in line to get copy. Never has the film looked or sounded better, and the disc’s special features are more than enough to please the most fervent admirer of the film. I love everything about this disc – it helped prove that there is no limit to my appreciation for Malick’s film.

1. Fanny and Alexander (1982)/Persona (1966), Ingmar Bergman
We conclude with two of Bergman’s finest offerings: the expansive epic, Fanny and Alexander, and the flawless headtrip, Persona. A few years ago, I bought Criterion’s Television Version of Fanny and Alexander and rediscovered a film I had long since loved. I had no idea the three hour Theatrical Version could be improved upon, but that’s precisely what the five hour Television Version does. And believe me, this is not a taxing five hours – the time genuinely rolls by as you become more engrossed with the hardships of the Ekdahl family.

As for Persona, Criterion recently issued a three disc box set that has, in no uncertain terms, already become one of my prized possessions. The film (which ranks among my Top 10 of all time) is presented flawlessly and is accompanied with some marvelous special features, including the full length doc, Liv and Ingmar. With this issue, Criterion has once again made me fall in love with a movie I didn’t think I could love more. Is there anything better in the world?