Today, we have a really great article from TDYLF reader (and apparently a great writer), Beth Kelly. Enjoy!

Whether you know him as “Godzilla” or “Gojira”, a monster by any other name does not compare. Godzilla is the internationally-respected icon of radioactivity gone AWOL, famous for destroying cities from Tokyo to Paris with his hulking jaws, giant green feet and dangerously bad breath. But being a pop culture icon for over 60 years isn’t easy. After causing a ruckus in more than thirty different films, Ishiro Honda’s iconic monster remains with us, bringing life to our desire for monstrous imagery. And he isn’t going away anytime soon. 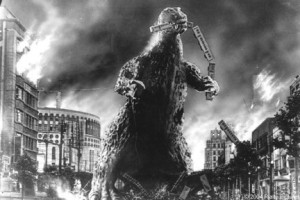 Following the conclusion of the Second World War, director Ishiro Honda lived through the nuclear disasters in both Hiroshima and Nagasaki. When additional nuclear testing and the Lucky Dragon incident caused a nationwide panic in Japan, he was compelled to create a film that would metaphorically showcase the horrors of atomic warfare and radioactive fallout. Inspired by the plot and stylistic elements within the American film The Beast from 20,000 Fathoms, Gojira was released in 1954.

A giant prehistoric beast, awakened by nuclear explosions, rises from his slumber and begins to take his revenge on the Japanese people. Thrashing through Tokyo in a rage aimed at the scientists responsible for the nuclear blast, he seems impossible to defeat. The plot of the film primarily focuses on Doctor Serizawa, one of the scientists, as he weighs the decision to use more nuclear weapons to combat Gojira – potentially escalating the already-dangerous levels of radioactivity present on the island. In the end, the doctor sacrifices himself to ensure such devastating weaponry never makes it into the public’s hands. The film tackled timely issues pertaining to scientific responsibility and wartime guilt. Filled with symbolism and strong messages about nuclear war, it remains incomparable, even among the CGI-driven monster movies of today. 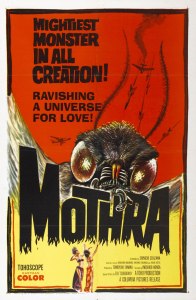 Gojira was a huge success in Japan, fathering 27 more sequels and becoming the backbone of the “Kaiju” genre for many years to come. “Kaiju”, meaning “strange creature” in Japanese, includes hundreds of different types of cinematic monsters, ranging from Mothra to Rodan and everything in between. Many of the enormously-proportioned monsters would continue to be used as symbols of the misuse of atomic weaponry and fears surrounding the invisible powers of radioactivity.

Gojira did make his his way to the USA, but he lost a lot of his original character in the process. In its American iteration, the film was edited to include a white American journalist character played by Raymond Burr, and cut to eliminate any anti-nuclear messages that might arouse feelings of self-reproach in American audiences. Unfortunately, its release would also set a strange precedent for the series in Western cinemas. Bad dubbing, comically campy plots and terrible acting would lead Godzilla away from his role as a harbinger of radioactive terror and towards a career as a matinee idol and children’s TV star. While some of his films, such as 1998’s notorious flop Godzilla are available online (see here or here), fans of the monster have largely come to rely on late-night TV reruns for hits like Godzilla vs. Mechagodzilla II.

Seeing new iterations of the monster to be completely out of touch with what the original Gojira film stood for, Toho shut down any further use of their iconic creature in the late nineties. In 2014, however, American production studio Legendary Pictures once again revived the Godzilla epic. Grossing more than $524 Million worldwide over the course of its run, it brought Godzilla, as well as the original concept behind “Gojira”, back to the forefront of pop culture. Springing forward from this rejuvenated success, Toho has decided to release another Gojira film in 2016, with filming set to begin the summer of 2015.

Godzilla plays on the darker side of so-called scientific “progress.” With a variety of ever-threatening global hazards, including the looming threat of nuclear war and the upcoming 70th anniversary of Hiroshima and Nagasaki, it will be interesting to see which message this new film will attempt to impart on contemporary audiences. Following the release of 2014’s American Godzilla movie, Japanese movie makers will finally have the opportunity to reclaim a diluted cultural legacy, hopefully this time with political messages intact.