The Great Netflix Harvest of 2006

I recently mentioned a fun phenomenon in my growth as a movie-watcher. I had started to ramp up my interest in cinema from 2003 to 2005 by going to the theater a lot more, creating a Hollywood Stock Exchange account, and watching a lot of the AFI Top 100. Much of that is thanks to my friend who was once babysat by the sister of the guy who played Nuclear Man in Superman IV. But in 2006, my movie-watching habits exploded. The difference was that I had gotten a Netflix account. And I took full advantage. END_OF_DOCUMENT_TOKEN_TO_BE_REPLACED

It’s time yet again for my favorite feature at TDYLF- my annual list of the 50 greatest French films of all-time. One aspect I’m starting to really enjoy about this list is how organic it is. Each year, movies rise and fall thanks to re-watches, exposure to new films, and new insights. Keeping and maintaining this list throughout the year also serves an important function for me. It motivates me to continue learning, and grow as a French film enthusiast. A few notes before we get started:

With that out of the way, I present to you  the 50 greatest French films of all-time: END_OF_DOCUMENT_TOKEN_TO_BE_REPLACED

I give a lot of love to a lot of directors here at TDYLF. But there’s one that I don’t feature nearly enough. Luis Buñuel is my second favorite filmmaker, just behind Ingmar Bergman. His most iconic scene, from Un Chien Andalou, is celebrated in my primary header (if playfully, with C3PO’s mug photoshopped in). His early films are a visual feast, and his middle and late-period films are catnip for nerdy intellectuals. He’s sort of the sociologist’s filmmaker, taking every facet of society and social behavior, and stripping it down to nothing in a humorous way. Having said all of that, I realize that not a lot of people are familiar with Buñuel and his films. I’ve put together a quick infographic with some fast facts about the wily Spaniard. END_OF_DOCUMENT_TOKEN_TO_BE_REPLACED

Great Moments in Movie History: The Phantom of Liberty (1974)

It’s Friday, so that means it’s time for another “Great Moments in Movie History (Using Stick Figures)”. My choice this week is one of my very favorite movies ever made- Luis Buñuel’s masterpiece of conceptual surrealism, The Phantom of Liberty (1974). I love every single vignette in the film but the one that made me such a huge fan of the movie was one of the very first. I’m paraphrasing the actual quote from the character, but it’s close enough to make the point about what Buñuel was doing. Enjoy! END_OF_DOCUMENT_TOKEN_TO_BE_REPLACED

Wunderkind film writer Sam Fragoso from Duke & the Movies has cooked up a doozie of a blogathon this week. This is the task at hand:

Extraterrestrial forces land on Earth. Unknowing of our planet and society, you can pick five films from the history of cinema that represent humanity. What titles would you choose and why?

It’s a really unique concept. At its heart, the blogathon is about boiling down all of humanity and civilized history into five films. As a human, I feel that I’m uniquely qualified to select five films of my own, each for specific reasons. END_OF_DOCUMENT_TOKEN_TO_BE_REPLACED

–
This week will mark Bastille Day. What better time to honor a country that’s given the world of cinema so many incredible films? In terms of both quality and quantity, I’d stack the history of French film up against any on the world scene. To pay proper homage for Bastille Day, I’ve compiled the 50 greatest French films of all-time. A few notes before we get started: END_OF_DOCUMENT_TOKEN_TO_BE_REPLACED

It’s time for the third entry in the Iron Director series. In the first edition, the theme was “Directors I became obsessed with in 2010”- Francois Truffaut and Rainer Werner Fassbinder, with Truffaut emerging victorious. In the second edition, I pitted two people that I consider to be the two greatest living American directors, Martin Scorsese and the Coen Brothers. Scorsese just barely earned the win. For this entry, we’ll be taking a look at two guys with the same name, albeit different spellings- Louis Malle and Luis Buñuel. To set the mood, I highly recommend watching this clip of The Kingsmen singing Louie, Louie. These two have always been linked in my head for a handful of reasons. I have an ongoing internal conversation about which of the two is my 2nd favorite director of all-time. I’ve mentioned both of them as my 2nd favorite on multiple occasions. Depending on the week, you’re liable to get a different answer. I’m a great admirer of both of their filmographies. Both have worked, and excelled, in several countries. There aren’t a lot of similarities on the surface, but going a little deeper shows that they’re not wildly different. Let’s dig in:

END_OF_DOCUMENT_TOKEN_TO_BE_REPLACED

I had a little party last night to celebrate my blog’s first birthday. I also invited some friends. Left to right: END_OF_DOCUMENT_TOKEN_TO_BE_REPLACED

Why I Buy the Movies I Buy 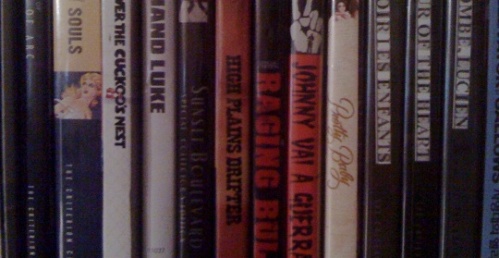 After enjoying a Spaced marathon a few days ago, I remarked to my friend, “That was one of the best purchases I’ve ever made”. And it’s true. I bought the entire series- two seasons of Daisy and Tim and Mike and Marsha and Brian and Twit… er, Twist- less than 12 months ago. I’ve already re-watched it twice. On top of that, I’ll be loaning it to a friend and fellow Edgar Wright fan within the next few months. I look forward to helping someone else turn on and tune in.

Hearing the comment come out of my mouth made me wonder just what exactly inspires me to buy the movies (and TV shows) that I buy? END_OF_DOCUMENT_TOKEN_TO_BE_REPLACED

For many reasons, some films are in peril of being lost to time. For instance, Luis Buñuel’s Viridiana was perceived as so blasphemous that Franco and his censors ordered that all copies be destroyed. On the Criterion Collection release, the film’s star- Silvia Pinal- says that two copies of it were buried, waiting to see the light of day only after better times had come. It took some 16 years before Viridiana gained traction. Here’s a list of five films that need a wider release and deserve to be more readily available to people.

Speaking of Buñuel, one of his best films is virtually impossible to find. The best luck I’ve had finding Los Olvidados is with out of print VHS tapes that have very poor subtitling. Everything about the film screams “Buñuel”- it hums with the skewering of class structures, total institutions, and an eerie, experimental dream sequence that’s one of the best I’ve ever seen put to film. It deserves to be seen. END_OF_DOCUMENT_TOKEN_TO_BE_REPLACED