A lot of aspects help create a movie’s thumbprint. Acting, writing, foley, and score all come to mind. Another aspect that comes to mind is cinematography. Whether you realize it or not, films have a unique color palette that can invoke any number of feelings. Here are some examples. END_OF_DOCUMENT_TOKEN_TO_BE_REPLACED

Tagged as Attack the Block, Color Palettes, Contempt, Film, Gone with the Wind, Movies, Rango, The Big Lebowski, The Dark Knight, There Will be Blood

The Soundtrack Series: The Coen Brothers

I have a confession to make. Last week, when I started The Soundtrack Series, I kicked things off with Stanley Kubrick. The truth is that the Coens were actually the inspiration for the series. They would’ve been the first in the series but I’m smart enough to realize that TDYLF is often oversaturated with the Coens. But I’ve waited a whole week now, and even without the Coenification of this site, they’d be a worthy choice. Without further ado, here’s entry number two in the Soundtrack Series- the Coen brothers. END_OF_DOCUMENT_TOKEN_TO_BE_REPLACED

Tagged as A Serious Man, Coen Brothers, Fargo The Lost Sheep, Film, Movies, O Brother Where Art Thou, Raising Arizona yodeling, Soundtracks, The Big Lebowski, The Man Who Wasn't There

12 Images of the Coen Brothers On Set

Joel and Ethan Coen are an undeniable filmmaking force, a pair of brothers who have asserted themselves by making some of the best films of the last 30 years. From Blood Simple (1984) to Fargo (1996) to A Serious Man (2009), they’ve established a very distinct style that has wowed critics and audiences alike. Seeing the recently released footage of their upcoming movie, Inside Llewyn Davis, has left me feeling nostalgic about their past work. Relive their masterful career with these behind-the-scenes photos of the Coens on set. END_OF_DOCUMENT_TOKEN_TO_BE_REPLACED

As a lover of all things Lebowski, I’ve heard for years that the Coens stoner opus had drawn significant inspiration from Raymond Chandler’s novel, The Big Sleep, and Howard Hawks’ film of the same name by proxy. After hearing it from multiple sources, I decided that I really needed to see The Big Sleep (1946) to determine the depth of the similarities. Despite the best of intentions, I never actually got around to seeing Hawks’ film–after five or six years–until this past weekend. And sure enough, the people who had told me of the similarities were telling the truth. The similarities are amusing, striking, and served to add to the enjoyment of both films. Here’s an infographic that illustrates just how similar the two films really are: END_OF_DOCUMENT_TOKEN_TO_BE_REPLACED

The World Series has come to St. Louis. The fifth game of the seven game series, played Tuesday night, featured one of the stranger odysseys in baseball history. Cardinals manager Tony LaRussa reached for the bullpen phone and informed the coaches in the bullpen to warm up Mark Rzepczynski and Jason Motte. The plan was to use the left-handed Rzepczynski against the left-handed hitting David Murphy, and then bring in Motte to face the dangerous Mike Napoli. But all hell broke loose. For whatever reason, LaRussa’s phone call was misinterpreted on the receiving end and Rzepczynski faced Napoli, who crushed what proved to be the game-winning double. Lance Lynn, who was supposed to have the night off, inexplicably showed up on the mound when LaRussa finallly relieved Rzepczynski. The next day, someone created a photo (to the right) reimagining how that phone call must have gone and it added much needed levity to a disappointing defeat on baseball’s biggest stage. I’ve decided to carry on with the levity using other famous phone calls from pop culture. END_OF_DOCUMENT_TOKEN_TO_BE_REPLACED

Today in “The Movies We Love”, I’ll be honoring this week’s New York reunion of the cast of one of my very favorite movies- The Big Lebowski (1998). The name itself prompts smiles from just about anyone you meet. It has proven that it has enduring charm through Lebowskifests all over the U.S. What is it about The Dude that makes him so durned special? END_OF_DOCUMENT_TOKEN_TO_BE_REPLACED

The Big Lebowski, Re-Enacted by the Geico Xtranormal Bears

You may have seen the Geico ads with the weird talking bears “or dogs or something“. They were created at Xtranormal.com. I’ve re-created some scenes from one of my all-time favorite movies, and one of the most quotable films of all-time, The Big Lebowski. Enjoy!

The Dude Meets the Big Lebowski

END_OF_DOCUMENT_TOKEN_TO_BE_REPLACED

100 More Things I Love About the Movies

–
When I passed the 100,000 hit marker in November, I honored the event with what became one of my most popular entries- 100 Things I Love About the Movies. As it turns out, my odometer recently rolled over another milestone- the 200,000 hit marker. As logic follows, I’m due for another stroll down 100 Things Avenue. So without further ado, here are 100 More Things I Love About the Movies: END_OF_DOCUMENT_TOKEN_TO_BE_REPLACED

I had a little party last night to celebrate my blog’s first birthday. I also invited some friends. Left to right: END_OF_DOCUMENT_TOKEN_TO_BE_REPLACED 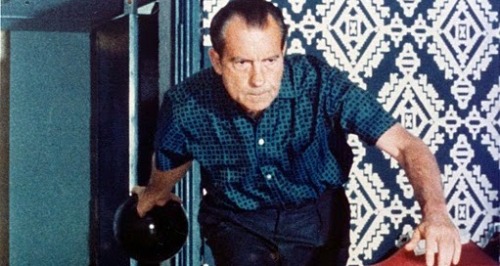 President’s Day is just a few weeks off and I prefer to think of it as something more than an opportunity for car and furniture dealers to have President-themed sales spurred by tacky ads with local morons in stovepipe hats. Perhaps the most popular president in Hollywood has been Richard Nixon. You could probably write books about Nixon’s role in cinema, something I glossed over briefly in my review of Serpico. He’s such an enduring symbol of so many things- paranoia, loss of innocence, madness, irony, dishonesty, and corruption. Or perhaps it’s humanity. Like all of us, Dick Nixon was fallible. He made mistakes. In recent years, there’s been something of a movement to paint him as an Eddie Haskell-style lovable scamp. However you paint it, he’s all over the place in the movies- far more than his presidential peers. Here’s where good ol’ Richard M. has appeared in the movies. END_OF_DOCUMENT_TOKEN_TO_BE_REPLACED