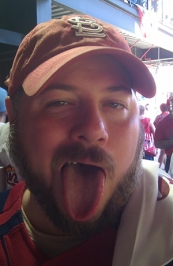 In 2011 at Busch Stadium, during a Cardinals playoff game. I swear I have those teeth in the middle.

My name is John LaRue, and I am a graphic designer/production editor/print purchaser/data visualization geek. In my spare time, I like to watch a boatload of movies and television, and write about all of it here. I live in St. Louis, Missouri, which is the provel cheese capital of the world. That’s primarily because nobody else in their right mind throughout the world would eat the stuff.

The only way to answer “Where are you from?” is by saying that I was raised mostly in Madison, Wisconsin, by my Missouri-native parents. And that means that I have very strong roots both in Madison, Wisconsin and also throughout the state of Missouri. I have previously worked for five years in professional baseball–two of those as an intern–as a Media Relations Director. It goes without saying that I’m also a huge baseball geek and diehard fan of the St. Louis Cardinals.

At TDYLF, I have recently shifted my focus to data visualization (infographics!) and general design. If you’ll pardon an obnoxious listing of my achievements, my work here has been featured on io9, Grantland, movies.com, Wired, Slate.com, /Film, and the Toronto Star. I was also featured on the now-defunct IMDb Hit List 21 times. My work has been published in I Love Charts: The Book and The Best American Infographics 2013.

If you’re looking for a few places to start, I suggest you begin with these:

Baseball at the Movies: A Timeline

100 Things I Love About the Movies

The Movies That Have Influenced Edgar Wright Films

Flowchart: Which Horror Movie Should You Be Watching?