Eat My Ten Favorite Shorts from the Simpsons’ Treehouse of Horror

One of my favorite parts of each October is the Simpsons’ Treehouse of Horror episode. Major League Baseball wreaks havoc with it, forcing it to air on a different date each year, but it’s never been a reason for me to miss it. Including this year’s episode, which aired on October 7th, there have now been 24 Treehouse of Horror episodes, each possessing a trio of horror shorts. That’s a grand total of 72 Simpsons‘ horror shorts. Here are my ten favorite.

The Raven, Treehouse of Horror I
This was from the Treehouse of Horror that started it all in 1990. It had everything you could want, either from The Simpsons or the holiday. It was narrated by James Earl Jones, it featured Bart heckling Lisa for thinking it was scary, it derives straight-on from classic source literature, and the whole thing is peppered with Homer behaving like a frightened buffoon.

Attack of the 50-foot Eyesores, Treehouse of Horror VI
You have to love a short that has Paul Anka’s guarantee (guarantee void in Tennessee). 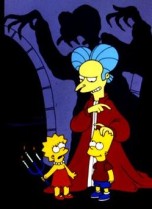 Bart Simpson’s Dracula, Treehouse of Horror IV
The writers created a pitch-perfect parody of Bram Stoker’s Dracula (1992), all while allowing their characters’ personalities to shine. The goof on Dracula’s shadow was one of the first (if not THE first) among many that came later in other TV shows and movies. It’s still one of my favorite moments on the show. And of course, it ends with Marge revealing that she’s the head vampire and another spoof, of Peanuts‘ Christmas special of all things.

Homer’s Nightmare (If I Only Had a Brain), Treehouse of Horror II
You may recall this short as the one where Mr. Burns removes Homer’s brain with an ice cream scoop and implants it into a robot body. The creation of Robo-Homer goes disastrously, and the whole thing ends with Homer and Mr. Burns sewn together in a parody of The Thing with Two Heads (1972).

Married to the Blob, Treehouse of Horror XVII
It’s a great parody of The Blob (1958). But beyond that, there’s something hilarious about Homer’s first reaction being to eat the green goo from space. And there’s something heartwarming about seeing a giant blob Homer demolishing Springfield. Plus, there’s one of the writers’ weird digs at Arby’s. It’s a recurring bit on the show and it makes me laugh every time. 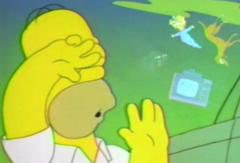 The Homega Man, Treehouse of Horror VIII
What makes this short stand out for me is Homer’s obliviousness to the world ending, up to and including when he punches a charred corpse in traffic for not moving at a green light. Once he realizes what has happened, he laments the loss of “Little Bart… little Lisa… little Marge… and the rest”. In Homer’s mind’s eye, “the rest” includes the television, the pets, and Maggie.

Citizen Kang, Treehouse of Horror VII
It’s better as a political parody than it is horror parody, and that’s just fine with me. It featured the following great one-liners: “I don’t want to serve out my term naked in a tube” (the real Clinton); “That’s slick Willie for ‘ya” (Marge, after hearing alien Clinton- Kodos- say “I am Clin-ton. As overlord, all will kneel trembling before me and obey my brutal command. End communication.”); and “Abortions for some, miniature American flags for others.” By including this, I can now say “Don’t blame me. I voted for Kodos.”

Nightmare on Evergreen Terrace, Treehouse of Horror VI
If you want to talk about great parodies, nothing tops this one of the Nightmare on Elm Street series. And it features this excellent brief segment as the impetus:

The Genesis Tub, Treehouse of Horror VII
The short where Lisa creates a civilization around her tooth is a bit of a relay race of references. It started with a Twilight Zone episode with a similar theme, parodied by The Simpsons, and then later parodied by South Park in an homage to The Simpsons. It’s still one of the first shorts I think of when I think of the Treehouse of Horror episodes.